The Shocking Truth about Conventions 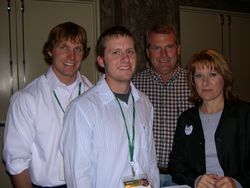 Yes this is a picture of our family taken last week at the BIG 50th convention. It was quite a change for us going to the city and being surrounded by 10,000 other distributors. Actually we felt a little like cows being herded from place to place. Adam the one in the middle had never been to a large city before much less in a big motel. He was amazed at all the tall buildings and how close they were together and kept pointing out a building and asking me if I thought it was leaning.

I was colder than I had ever been in my life. It's amazing how cold it is in San Fransico in the summer. I had planned on air conditioned buildings but didn't realize I should have packed my winter clothes! The first couple of day's I was wondering why I thought it was so important that we would even go to something like this.... But the night after we got home I realized just how important conventions are.

The real reason we all decided to go in the first place was so both Matt and Adam could experience a MLM Convention and use the expenses as a tax write off. During the trip I was wondering why I thought it was so important that we attend. This convention was not only a re-affirmation of why I'm doing this business... but has inspired my husband to go on the new weight loss program and both Matt and Adam have gotten a lot more serious about taking their own businesses to the next level and never entering the corporate world. My dreams are now becoming a reality to have a business that the whole family works full time.
Posted by Cindy McAsey at 7:23 AM